We’re so excited for our CEO, Randy Zechman, and his family as they embarked on a 5-month journey to five different countries. He and his wife have dreamt about this trip for years and have been waiting for the perfect time. Their trip was highlighted in The Mercury News  article by Sal Pizarro on Sunday February 10th, 2019.

“A trip around the world is something you might do in your 20s and not yet saddled with responsibility, or maybe later in life when you’ve retired and cashed in on that stock portfolio or downsized a house. But it would seem impossible for a family of four, especially with two kids in elementary school.

Don’t tell that to the Zechmans. On Sunday, the San Jose family will embark on a five-month journey that will take them to Thailand, China, Croatia, Morocco, Ecuador and the Caribbean. It’s a trip that Randy and Alisa Zechman have been talking about in one form or another since their third date. “It was one of those things that over a bottle of wine we’d fantasize what that trip would be like,” said Randy Zechman, who is no stranger to adventure: He’s made the swim from Alcatraz and marked every decade of his life since his 20s by completing a triathlon — including one last summer for his 50th birthday.

But a few years ago, the trip stopped being the stuff of fantasy and started getting real. They knew they wanted to do the trip after their youngest child was 5 but before their oldest turned 13. And with Maya now 11 and her sister, Shae, 7, winter 2019 was right in that window. 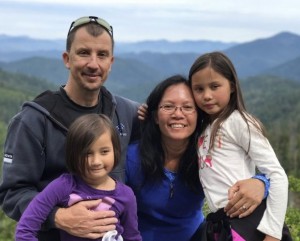 Armed with Lonely Planet’s “The World: A Traveler’s Guide to the Planet,” the Zechmans narrowed down a list of 30 potential destinations to just a handful. “This trip has always been about culture, so we had to go to different continents,” Zechman said. Alisa Zechman is Chinese, so that was always going to be on the list. The family also bought an investment property in Morocco, overlooking the Mediterranean Sea, so that was another pin stuck into the map. The rest built itself organically as they read more and more about each place. “The kids really wanted to go to Western Europe,” he said. “But there’s been at least two dozen people we’ve talked to about Croatia and not a single person says a bad word about it.”

Logistically, there were a lot of details to work out. Zechman co-founded Clean Solar, a San Jose-based residential and commercial solar installer, and needed to find someone to take over as CEO of the 50-employee company. And figuring out how their daughters — one is in fifth grade, the other in first — would miss five months of school without falling behind was a bit of a challenge. They’ve loaded up with books and lessons and plan to continue the curriculum the girls were learning at Merryhill Elementary School, which has given its blessing to the adventure. Maya’s classmates made a smiling paper version of her this week and took pictures of it sitting at her desk.

“The kids are going to be smarter human beings at the end of this trip no matter what,” Zechman said. “Culture is No. 1 on this trip, but No. 2 is for our kids to understand that we have it pretty good here and we need to be contributing members of society around the world.”

And for once, the Bay Area housing crunch actually had a positive effect. The Zechmans are renting their house while they’re gone, and that income will help cover the costs of the journey, which they expect to run into the low five figures. “We’ve kind of run numbers over the years on how much we can afford,” Zechman said. “We had a general budget in mind from the very beginning.”

They plan to immerse themselves in each destination, staying several weeks at a time and looking for ways they can help the local communities they visit before moving on. Unlike the stereotypes of people loading up steamer trunks for such a trip, the Zechmans are traveling light: Randy and Alisa will carry large backpacks, and the girls are each bringing a small roller suitcase. “Considering what we plan to be doing, I told the kids not to bring their favorite stuff, to bring the second-string clothes,” Randy said. “We’ll be shedding clothes along the way and picking up new things.”

The Zechmans will celebrate their 14th wedding anniversary in Quito, Ecuador, in June. They plan to be back in the U.S. by the Fourth of July, but before that, they’ll wrap up the trip on Bonaire, a small island in the Caribbean Sea just 100 miles off the coast of Venezuela, where they’ll meet up with a group of other families they have vacationed with for the past several years. “After all that time away,” Zechman said, “it’ll be good to see friends.””

Randy Zechman is the co-founder and misChief Executive Officer of Clean Solar. Randy is an entrepreneur who has created a number of successful businesses, including the largest chocolate fountain rental company in the country and a publishing company focused on highlighting hotels, restaurants and attractions in Silicon Valley. Randy holds a degree in Marketing and Management. His philosophy is simple: Business is business, and you don’t have to be an expert in an industry to start a business.

Jeff Ritchey is the co-founder and Chief Operating Officer of Clean Solar. Jeff is a San Jose native and an award winning winemaker. He owns Sensorium Wines and was a wine consultant for several wineries in the Santa Cruz and Monterey areas. Jeff holds degrees in Geology (B.S. – UCSB) and Enology (M.S. – UC Davis). He has taught solar installation classes at Metro Education.